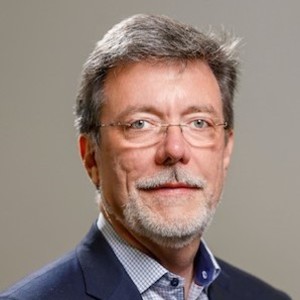 Tom Schreier ('84) oversees the Inspired Leadership Initiative as its founding director where since 2016 he has had the privilege of working with the leadership, faculty and staff of Our Lady’s University to develop a distinctive program for accomplished leaders who have completed their traditional careers and are looking to pivot to become an even greater force for good.

Tom's career began at Northwest Airlines in 1988 as director of finance. He rose to the position of vice president of finance, where he was responsible for corporate finance, pension oversight, cash management, and other related areas. From Northwest, Tom went to Credit Suisse First Boston (CSFB) in New York, where he became a top-ranked senior equity analyst covering the global airline industry.

Following his time at CSFB, Tom had the opportunity to oversee all of equity research and become a member of the management committee at Piper Jaffray, where he was a key member of the team that brought the firm’s equity business to national prominence.

Tom was then asked and agreed to lead the turnaround of Piper’s asset management as its CEO and president. When Piper was sold by U.S. Bank, the asset management business remained at US Bank and was rebranded under his leadership to FAF Advisors/First American Funds. During this period, the firm grew to over $100 billion in assets under management.

With full support of U.S. Bank management, Tom engineered the sale of FAF Advisors to Nuveen Investments, where he served as chairman of Nuveen Asset Management, the firm’s largest investment adviser, and vice chairman of the parent company that grew to in excess of $225 billion in assets under management. Nuveen was acquired by a strategic buyer, TIAA, in October of 2014, and Tom passed the reins to new leadership in June of 2016.

Currently, Tom serves as chairman emeritus of the Allina Health Board, a Director of Piper, Sandler Companies and also serves as a trustee of the Minneapolis Institute of Art. He is a member of the Applied Investment Management Advisory Board for the University of Notre Dame and a founding investor in Granite Global Ventures. While in the investment industry, Tom was a long-standing member of the Board of Governors of the Investment Company Institute (ICI) and served on its Chairman’s Council.  Additionally, Tom is former chairman of the Saint Thomas Academy Board of Trustees and continues to serve on its Finance and Investment Committees.

Tom’s education includes a B.A. in economics and German from the University of Notre Dame and an M.B.A from Harvard University.